Notes from a son: If my father’s version of growing up was true, and I’ve no reason to doubt his stories, my paternal grandfather was a moonshiner in Pennsylvania as well as a coal miner. Apparently he wasn’t always very nice when he was on the shine, leading my Dad, the eldest, to one night leave him passed out in the snow. Dad said as the boys got older they teamed up to set matters straight. By the time I met my Grandfather, in 1968 or so, he was a nice old man.
Due to Dad’s experiences growing up he developed a dislike of alcohol and the behavior of those who drank to excess. He hated going to business events where people would drink and try to drive, or pressure him to drink.
It was only natural that, at 24 and older than many of the men around him, he acted as a big brother of sorts. He held cash for some guys who just couldn’t keep from gambling and drinking away their payday, knocking some of them down if they tried to get their cash back before they were sober.
He said they always thanked him later.
(I’m pretty sure some of the antics and observations in this part of the journal were one of the reasons Mom never got to read it.)

February 1944
We got ready to disembark at 2:00 o’clock in the morning, but the boat wasn’t unloaded right away because the New Zealand dock workers are on strike. Yes, even here people can’t seem to understand there’s a war going on.
We got off at 3:30 a.m. and marched down deserted Auckland’s streets. How different from our first visit, when crowds lined the streets and cheered the Yanks. The town is about the same. It looks very familiar and no changes were noticeable. We marched to the train station and then waited for our coaches. We had two apples apiece while we waited.
We loaded on, and got on our way when the sun started peeping out. Then we saw our first fog, and even that looks good. We got off at Papakura and onto trucks to our new camp at Karaka North, 7-and-a-half miles away. When we go to camp it was day-lite.
The camp was very nice, located on the bend of a river. The scenery was perfect, and there were plenty of facilities, showers, day rooms, etc.
And, of course, there’s our sheep and cows staring at us.
We have one inconvenience. The 25rd Recon is still in the huts, and since the ship can’t be unloaded they can’t load on, so we have to erect perambular tents to sleep in until they leave, destination unknown.
The mess halls are very crowded with two Recons here. Some of the 25th Division guys are hard-up for money, so our boys are buying wrist watches.
Some guys are really suckers.
We don’t have to sleep on the ground because we got old, beat-up cots from some salvage depot. They were easy to fix. All we had to do was put brand new cot covers on the frame. It’s colder than hell here at nite.

Later:
The 25th Recon finally moved out, so we moved in. Collins, LaMarre, LaJoie and myself are in one hut. A screwier combination can’t be found for love or money.
We can’t leave for town for three days. I guess we’re quarantined to see if any malaria cases will pop up.
Capt. Dall read off rules for behavior, and a list of off-limits places, also our pass policy. It sounds O.K. Comes the great day, we’re off to see civilization at close quarters.
We went down to Auckland by truck, no trains for us. Now we get bus service to and from camp.
The first day in Auckland I felt funny. It was too crowded and noisy for my jangled nerves. People are still in a hell of a hurry, but so am I, to get me where, but fast.

March 1944:
I’m seeing the town very often and only a few things have changed. Prices are up. Meat will be rationed. And people are now accustomed to seeing Americans and don’t seem as friendly, but I guess we who have been in the jungles must seem goofy to them, too.
However, the girls are still man-crazy, as long as he has pants, he’s welcome. But back home we read of girls doing the same, so I guess they’re the same the world over. Of course, there are plenty of good ones, too.
We have about 9 civilian cars in camp now. Prices are high, but the boys are well-heeled. Back home we’d call them “junks,” but here they’re worth pounds. A pound is still worth $3.24 in our money. The only troubles with those cars are the tires. Some of them are on their last threads.
I had my first three-day pass. I went by train to Hamilton with Lajoie and Lamarre. It’s a nice town, not too big and there aren’t many other soldiers here. I had a yellow braid put on my cap. Now we look like soldiers. I feel funny with creased pants and wearing ties – the evils of civilization. Oh well, we can take it. May it last for months.

Later in March:
We’re hearing plenty of this 18-month relief bill. Mom and all seem to believe I’m on my way back. Contrary to reports they’ve been hearing, we’re over here for 24 months before we’re eligible for the states. And then only if they have space, and if we’re not needed. What a laugh. It shows what lengths politicians go to to get votes. I guess our people are too gullible for their own good.
Our mail is lousy, but we still write home to boost-up civilian morale.
I had a seven-day leave, so we went by truck to the Potoma New Zealand National Park, a sort of resort town.
People here are very friendly. The Red Cross got us rooms at the Commonwealth Hotel. The rooms are very nice and the prices reasonable. I got a double room, so Allen and I shared the room.
We met a girl there named Nan. She was a blonde and had more curves than the Penna. Highway She was really well protected, because 12 of us were there and she liked all of us. However, Kelly and I only took her out in the day time to go swimming and to play tennis.
Too bad this damn war doesn’t end so we could go home and see our own gals.
The girls here are as pretty as ours, but something’s lacking. They’ll never beat our American girls.
We went to the Cabaret Dance Hall to see the dance, the music was good and girls galore. Kelly and I flirted with every one of them, a few cuties, too. In fact, I stole one away from a staff Sgt. when he went to the men’s room.
The moral: Men, don’t leave your women, even if you have to.
I took plenty of snapshots. Two waitresses at the hotel consented to pose, so we obliged. The smaller one was cute and insisted on sitting on my knee. I know folks back home won’t believe me.
We visited hot water wells and geysers. We had a Maori woman for a guide. Boy, was she a snow artist. Maoris are natives of New Zealand, dark skinned, a sort of Polynesian type.
Some of their girls are beautiful, nicknamed “Night Fighters” (P-38s) because they’re so fast, and B-24s, the ones who are sort of fat. Plenty of Americans find solace by going with them. I have yet to hear a complaint. The Army has a law against it, but so far no one bothers to enforce it.
I rode a lot of bicycles. My legs really got a workout for a change.
All good things come to an end, so we headed back for camp and a week’s rest before we start in training again.
We’ve been here six weeks now. Our food is excellent, plenty of fresh meat, milk, butter, ice cream and plenty of liquor, beer and wine — and the boys are taking full advantage of it. 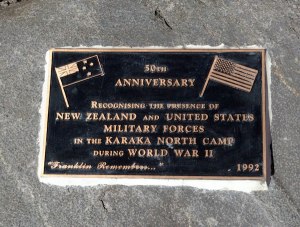